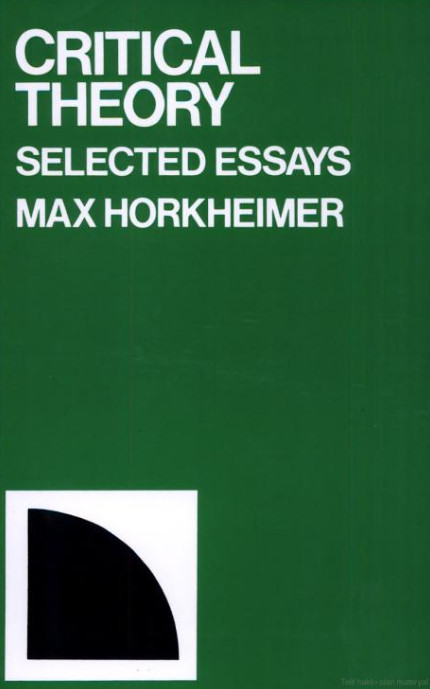 The concept of God was for a long time the place where the idea was kept alive that there are other norms besides those to which nature and society give expression in their operation. Dissatisfaction with early destiny is the strongest motive for acceptance of a transcendental being. If justice resides with God, then it is not to be found in the same measure in the world. Religion is the record of the wishes, desires, and accusations of countless generations.

But the more Christianity brought God's rule into harmony with events in the world, the more the meaning of religion became perverted. In Catholicism God was already regarded as in certain respects the creator of the earthly order, while Protestantism attributed the world's course directly to the will of the Almighty. Not only was the state of affairs on earth at any given moment transfigured with the radiance of divine justice, but the latter itself was brought down to the level of the corrupt relations which mark earthly life. Christianity lost its function of expressing the ideal, to the extent that it became the bedfellow of the state.

The productive kind of criticism of the status quo which found expression in earlier times as a belief in a heavenly judge today takes the form of a struggle for more rational forms of social life. But just as reason after Kant, even though it knows better, cannot avoid falling into shattered but nonetheless recurring illusions, so too, ever since the transition from religious longing to conscious social practices, there continues to exist an illusion which can be exposed but not entirely banished. It is the image of a perfect justice.

It is impossible that such justice should ever become a reality within history. For, even if a better society develops and eliminates the present order, there will be no compensation for the wretchedness of past ages and no end to the distress in nature. We are therefore dealing here with an illusion, the spontaneous growth of ideas which probably arose out of primitive exchanges. The principle that each one must have his share and that each one has the same basic right to happiness is a generalization of economically conditioned rules, their extension into the infinite. Yet the urge to such a conceptual transcendence of the possible, to this impotent revolt against reality, is part of man as he has been molded by history. What distinguishes the progressive type of man from the retrogressive is not the refusal of the idea but the understanding of the limits set to its fulfillment.

When the authoritarian state seems to engage in a historic conflict with religion, the essential issue is whether the two shall compete, be coordinated, or go their separate ways. A bureaucracy au courant with the contemporary situation takes over and reorganizes the old ideological apparatus in which the church had its share. Even if it involves hardship the church must ultimately see that its own social position depends on the continued existence of the present system. If these were to change, the church would lose all and gain nothing. Its position rests on the belief that absolute justice is not simply a projection of men's minds but a real eternal power; a future society, however, would cease to perpetuate this belief.

It is a vain hope that contemporary debates in the church would make religion once again the vital reality it was in the beginning. Good will, solidarity with wretchedness, and the struggle for a better world have now thrown off their religious garb. The attitude of today's martyrs is no longer patience but action; their goal is no longer their own immortality in the afterlife but the happiness of men who come after them and for whom their know how to die.

A purely spiritual resistance becomes just a wheel in the machine of the totalitarian state. True discipleship, to which many Christians may once again be called, does not lead men back to religion. Yet that image of perfect justice, the spreading of which brings neither power nor respect in this world or the beyond and which is accompanied by a growing awareness of its own vanity, may be more attractive to disillusioned believes than the empty self-satisfaction which religion in the last century either did not see within itself or else tolerated as well-intentioned.

Mankind loses religion as it moves through history, but the loss leaves its mark behind. Part of the drives and desires which religion belief preserved and kept alive are detached from the inhibiting religious form and become productive forces in social practice. In the process even the immoderation characteristic of of shattered illusions acquires a positive form and is truly transformed. In a really free mind the concept of infinity is preserved in the an awareness of the finality of human life and of the inalterable aloneness of men, and it keeps society from indulging in a thoughtless optimism, an inflation of its own knowledge into a new religion.